The Art of Longevity 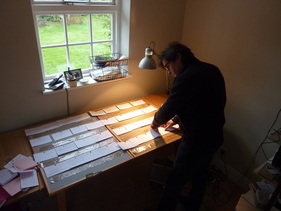 "Since being nominated for a short film Oscar a couple of years back I have been offered numerous feature film scripts to direct but none has quite lived up to my expectations. I'm choosy when considering projects - I can't help it! I want to put my heart and soul into the film. So the script has to be wonderful and wonderful scripts are rare. But when producer Samantha Waite sent "The Art of Longevity" I knew I'd found a film to which I could devote the next year or two of my life. That was after the first six pages.

By the end of Adam Preston's funny bittersweet tale of loss, longing, death, and sexual reawakening it had made me laugh, brought a lump to my throat and provoked a deeper than average thought or two - in short I was certain I had found 'The One'.

Unlike many of the scripts I read the characters are vivid, fleshed out, and embark on a journey which forces each of them to examine the way they live their lives. The ridiculous over-confidence of Dr Zahn contrasts beautifully with the helplessness and defeated nature of Richard, with a relatable, slightly helpless Ollie caught in the middle. Despite their obvious quirks these characters feel 'real'. They take part in truthful conflicts with much at stake - a crucial factor in comedy as the more invested the audience is in the characters the more they laugh when the joke arrives. " Ian Barnes, Director

The Art of Longevity is a comedy feature film screenplay. The film is being produced by LA based Pandemonium Productions and Oscar nominated director Ian Barnes ​is taking the helm.

A world famous American stage and screen actor has now agreed to play the pivotal role of Dr. Rufus Zahn.

Up five narrow flights of stairs in a  New York apartment a young proof-reader with a bad case of heartache is attempting to get through this irritating thing called existence as quietly as possible.  Apart from his morning cup of tea life offers few pleasures for Richard Drake.

His flatmate Ollie is almost his sole contact with the outside world.  An idealist who nurtures dreams of living by a pond, Ollie works for an international publishing house specializing in moronic celebrity biographies and is falling in love with a hard-boiled young executive called Sarah.

Richard decides to  publish a book entitled “The Art of Longevity” by an octogenarian Taoist master called Dr. Rufus Zahn in order to impress the old flame who broke his heart.  This hopelessly eccentric diatribe expounds on the health-preserving properties of sperm retention and has been rejected by every publishing house on earth. But what started as a ploy to woo his old flame quickly becomes a real publishing enterprise and before Richard knows it the incorrigible old goat has invited himself to stay. His visit provides the mayhem  that Richard and Ollie needed  to wake up,  grow up and start living.

This engaging and original comedy is packed with fresh characterization, genuine eccentricity and hilarious incidents.